You are here: Home > Retire > About us 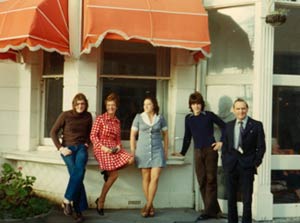 Ann & Arthur Sims (son of Eliza & Arthur Sims) carried out most of the developments to the property. They bought and refurbished neighbouring properties, thereby transforming the original 10 bedroomed bed & breakfast establishment into the imposing 40 bedroomed hotel you see today.

The property is now run by Nick, Sue, Chris & Jean Sims who continue to refine and modernise the facilities, while retaining the charm and elegance of a fine Victorian building.

With the coming of the railway to the South Coast in the 1840’s more visitors were to discover the delights of Bexhill. An early arrival, Lord de la Warr, seeing the great possibilities of the area, began developing the land between the old Saxon village of Bexlei and the sea.

At the peak of British colonialism, Lord de la Warr advertised the new town in the Calcutta Times as “ideal for the Army Officer and his family to take his leave or retirement”, and so set the style of quiet refinement for which the town is noted. As a result, many substantial properties were built within yards of the seashore, and a terrace of six such town houses now comprise The Northern Hotel.

It’s hard to trace back why it was called ‘The Northern’, but when the late Eliza & Arthur Sims purchased the property in the 1950’s it was probably already called this. As Bexhill was a booming resort in the late 1880’s and early 1900’s, it may well have been to attract the ‘Northerners’ to the property, then run as a bed & breakfast.
For more information try: The Bexhill Museum, The Bexhill-on-Sea Guide and The De La Warr Pavilion.

When the French invaded Hanover in 1803, many of the Hanoverian army escaped into England to fight for King George III. In December 1803 the King’s German Legion was formed. In 1804, several thousand KGL troops arrived in Bexhill. The impact on the local population was tremendous; at first the villagers likened the KGL to Cossacks, but their harmonious singing in St Peter’s church endeared them to the people of Bexhill. Martello Towers, built in the defence from the French can been seen along the south coast, the nearest at Normans Bay.

Many of the pictures in our Wellington Room, depicting the association with Hanover and the German legions, have been donated by the Hanoverian Society which established connections with us in the early 80’s and still hold their Annual Events with us. www.bexhillhanoveriankgl.co.uk